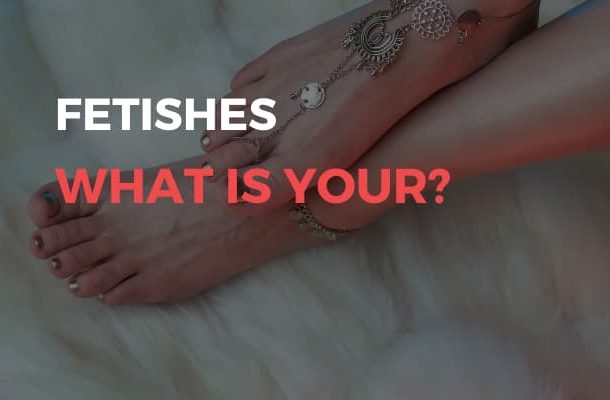 Don’t forget to leave your fetish in the comments 🙂

A fetish is a condition in which someone is sexually fixated on an inanimate object. It could be high heels, lingerie, or a non-genital body part. This individual, known as a fetishist, needs to touch, rub, smell or see the object to get aroused and climax.

Although no one is quite sure how a fetish arises, it is believed that it mainly affects men and probably starts when sexual arousal is inadvertently linked to the object.

After the success of the “50 Shades of Gray” trilogy, a topic that was considered a “taboo” became more recurrent in searches of search engines on the internet.

Sexual fetishes came out of anonymous searches and gained visibility without fear or shame. Several of the film’s fetish ideas were inspired by the preferred choices of men and women. Film production has also served to instigate a number of preferred sexual desires among women.

In fact, one of the tips that sexologists give to improve sex is to always try new sensations.

And if you were afraid to let go and put your fetishes into practice, know that there should be no taboos when it comes to sex! As long as there is mutual consent and satisfaction with your partner, having a fetish can spice up the relationship and make your sex life more pleasurable.

What is a fetish?

When talking about fetish, the first images that come to mind are black clothes, high heels, whips and sex toys. Fetish is nothing more than sexual arousal in response to an object or part of the body that is not normally sexual, such as shoes or feet.

Many people with fetishes must have the object of their attraction at hand or be fantasizing about it, alone or with a partner, in order to be sexually aroused, get an erection, and have an orgasm.

According to sexologist and psychologist Giovane Oliveira, fetish refers to a behavior or sexual excitement associated with a typically non-sexual object. Fetishes need to have some object present for you to achieve arousal and orgasm.

Do you want to know the main fetishes of men and which are the preferred sexual fetishes of women? Stay here with me and check out the list we’ve prepared below.

With that important distinction made clear, here are some of the more common fetishes:

It is a fetish that is generally more typical among men. Generally they like to sniff, lick or caress the partner’s or partner’s feet. It requires some interaction with any part of the foot to experience orgasm and overall sexual satisfaction. Usually foot fetishists like their partner to wear high heels during sex.

It’s a fetish that revolves around getting turned on by looking at people having sex or looking at naked bodies. It is a pattern of sexual behavior in which, generally, the predominant source of pleasure is not found in sexual intercourse itself, but in some other activity.

The exhibitionist, on the other hand, enjoys showing himself to other people, that is, being observed in intimate moments. This can be during sex or just walking around the house naked while noticing neighbors watching.

This fetish is related to people who experience immense sexual pleasure when their partners wear latex, rubber, vinyl or other shiny, tight materials. For others, just the smell or feel of latex is enough to speed them up.

Latex fetishism often involves dressing in the material. Observe sexual partners dressed in it or fantasize about latex wearers close to the skin or other garments, such as divers and workers wearing industrial protective clothing.

This is a very popular fetish and incorporates everything from pierced navel to eyebrows, penis and nipples, whether for just seeing or rubbing your body
in the pierced regions.

Very common, especially among straight and gay men, this fetish involves the person wearing clothes of the opposite sex. For many men, knowing they are wearing only one piece of clothing that is prohibited and that they can get caught doing so can increase the arousal factor.

Sometimes men like to hire a transsexual escort to perform their fetishes.

Water is a popular fetish among men and women. Just hearing the sound of running water is all the magic they need to keep going.

A shower, a faucet and even storms or rain can all contribute to fulfilling this sexual fetish. Some women may even be excited by the sound of thunder and lightning. These random acts of gigantic flashes of light in the sky may be enough to trigger your desire for sex.

According to the dictionary, urophilia is considered a paraphilic practice. It consists of sexual excitement associated with the act of urinating or receiving a stream of urine from the partner. In some cases, the urine is even drunk. Its practice is also called ondinismo, urolagnia or by the popular term “golden shower”.